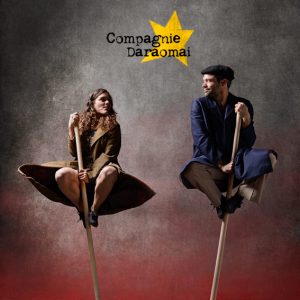 After meeting at the Académie Fratellini,

Agnès Fustagueras I Puig  and Marti Soler Gimbernat  decided to create a company more like themselves. Transformed by their common desire to use acrobatics as a theatrical expression and to always be in the centre of a narrative statement, they meld esthetics without moving too far away from the specificity of circus art. One foot of their company is in Carcassonne, where the home base is. And one foot in Catalonia, the birthplace of its founders. Daraomaï, the Franco-Catalonian company, naturally produced their first show, 1,2,3 Pomme, on both sides of the Pyrenees.

This hand-to-hand duo, accompanied by the dancer Joan Català and musically arranged by David Soubies, has been performed over 120 times. They benefited from public recognition as well as the support of the Verrerie d’Alès /PNC-LR; just what was needed to intensify this company’s desire to create and expand the artistic paths stretched between the circus, dance and theatre.

In 2012, Agnès staged L’Instant K with David Soubies. Gregory Feurté joined them to form an acrodance and chinese pole trio. Marti, on his side, founded Daraomaï-Zuid, a company based in Catalonia and created the Vals-Blessé(E).

Since 2013, Daraomaï has continued on its artistic path as a duo. With TiraVol, Agnès and David explore the circus apparatuses that they have created. The mixing of chinese pole, fixed bar and tightropes, is even more accentuated.