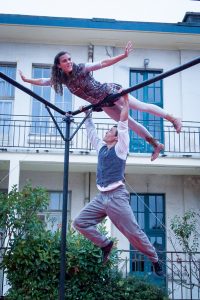 There are two of them, in the throes of bold acrobatics, at the crossroads between Chinese pole, high wire and acro-dance.
It’s a show that will take you into a suspended universe filled with a percussive atmosphere and brimming with emotion and joviality like a contemporary, illusive carnival; a daring cadence that moves between force and fragility.
They will evolve in this iron labyrinth, balancing, teetering, flying through the airs;eating away at each present moment. Along a truly initiatory path, they will expose themselves to the unknown forces that reside inside themselves. In this quest for identity, they will face up to their own convictions, their own differences. An unfathomable mystery is the relationships with others!
TiraVol is also the recounting of a journey, an encounter. It’s a dialog between two cultures, the north and the south faces of the same mountain. It’s an ode to diversity, a call to celebrate. It’s a tale between illusions and realities, a show where the body and being are the main roles"